The case for LCHF?

We spend a great deal of our ‘modern’ lives online with much time spent wading through the miss-information super-highway of social media.  Anyone with more than a passing interest in endurance sports would have noticed the swath of discussions around ‘Low Carb, High Fat’ diets for athletes.  A study done by Lambert and Noakes in the mid-90’s (1) showed that in 5 cyclists, a short-term LCHF diet produced some interesting results.
1 cyclist improved performance during a 90% maximal wingate test (1 got worse and the remainder showed little or no change).  At the time, not much was thought of this relatively inconclusive result, nothing came of it and it the world more or less forgot about it for the best part of two decades.
Wind the clock forward a couple decades and someone ‘discovers’ that dusty old research, writes a blog and it quickly becomes the foundation of a movement which may best be described as ‘the church of LCHF’.

Can your body burn fat as fuel and is LCHF actually a thing?

Yes.  Very yes.  If you can commit to some fairly stringent nutritional rules you most certainly can affect a change in your body to burn fat in the absence of carbohydrate.  In fact, Louise Burke showed in ‘project Supernova’ just how ‘plastic’ the body is and that it will adapt to using pretty much only fat as fuel in as little as 6 days (2).  Much more came from her review of LCHF for performance and the meta-analysis (linked below) is conclusive and insightful reading (4) – but more on that later.

A side note that LCHF should probably read “Low-Carb, Limited-Protein, High-Fat” which better describes the basis of the specific diet being discussed.  The low-protein component of LCHF is so often overlooked that the vast majority of people that believe they’re LCHF are actually just substituting Carbs for Protein which is not at all LCHF.

Just because we can, should we?

We all get excited about a ‘new thing’ that breaks from the status quo and who wouldn’t like to think they had taken some groundbreaking science and applied it to themselves for great effect?  It’s easy to fall in love with the notion of change and be a pioneer of a scientifically backed concept but at what cost?

Pound for pound, fat burned in the mitochondria releases much more energy than carbohydrates.  Even super lean athletes with single digit bf% numbers have ample fat stores to run even the longest races.  With these two bits of information you now have all you need to start constructing your very own Church of LCHF and begin assembling your congregation.  However before you go, take this fact along with you (perhaps wedge it in the ‘old testament’

with a series of other inconvenient truths) – To burn either fat or carbohydrates you require oxygen.  To burn fat you require more oxygen than can be supplied to equate to any real advantage in performance.  The ceiling isn’t 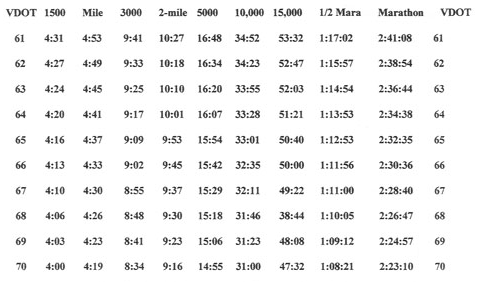 the fuel, it’s the mechanism by which it is burned.  Pouring aviation gas into your ‘Mazda 1’ doesn’t make it ‘Formula 1’ and there is just no fix for this.

Louise Burke went on to show in many ways that competition performance was compromised due in most part to this oxygen ceiling.  Interestingly one of the adaptations to this ceiling is to increase VO2max but without the traditional benefits of a few more steps up Mr Daniels VDOT tables (3).

Making the best of a bad situation

I am quick to plays devils advocate and often find myself exploring an argument from both sides.  Presented with the LCHF side-effect VO2max bump not having a corresponding performance improvement I begin to wonder – “but does it?”

Earlier this year one of my athletes approached me with an interesting proposition.  “I want to improve my VO2max 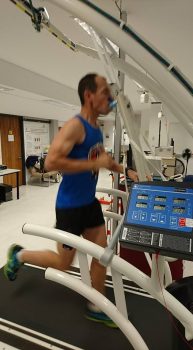 as much as possible, by any means, in 2 months”

Taking what I knew about the (side) effect of LCHF on VO2max I set about crafting a training plan that applied supercompensation stress specifically on maximal cardiac effort, coupled with a period of staged LCHF dieting.

Following a baseline VO2max test of 48 Dan went on a strict and accurate Low-Carbohydrate, High Fat diet Dan would adapt to burn fat within the first week.  He would also get a high volume serve of 3min ‘all-out’ effort reps with long recoveries separated by full rest days to enable adaptive stress response.  Following around 7 weeks of VO2max supercompensation training on a LCHF diet we transitioned Dan back to a ‘standard’ diet that included all macronutrients including the evil carbohydrate…  This because Carbohydrates are the best fuel and the body needs a short period of adaptation to learn how to use them effectively again.

“In a couple of weeks I am coming to the end of the 8week program but Kerry has been able to extract nearly 90sec off of my 5Km TT now sitting at 19:23 which hadn’t budged in 2 years and has increased my Vo2 to over 60 from 48 in 6 short but intense weeks. Pretty happy considering I’m in my mid 40’s” – Dan Derry

I will suffix this post with the note that,

What I did show – once – for Dan, was that you can high-jack the VO2max response of LCHF and incorporate it into a periodised diet, coupled with training focused on stressing maximal effort.  This result was gained by two approaches.

Before you personally undertake drastic changes in diet and exercise please consult a qualified specialist clinician.

(2) https://www.ncbi.nlm.nih.gov/pmc/articles/PMC4672014/ – Re-Examining High-Fat Diets for Sports Performance: Did We Call the ‘Nail in the Coffin’ Too Soon?