It’s been a few days now since the amazingness that was Ultra Trail Australia, and we are only just starting to get over the lack of sleep and the emotional roller-coaster that the past week has been.

In July last year Kerry used his running knowledge, maths prowess, and computer nerdery to create a training system which was new and very different to everything else that was on the coaching market. Within a week 30 athletes had joined and SQUADRUN was born.. 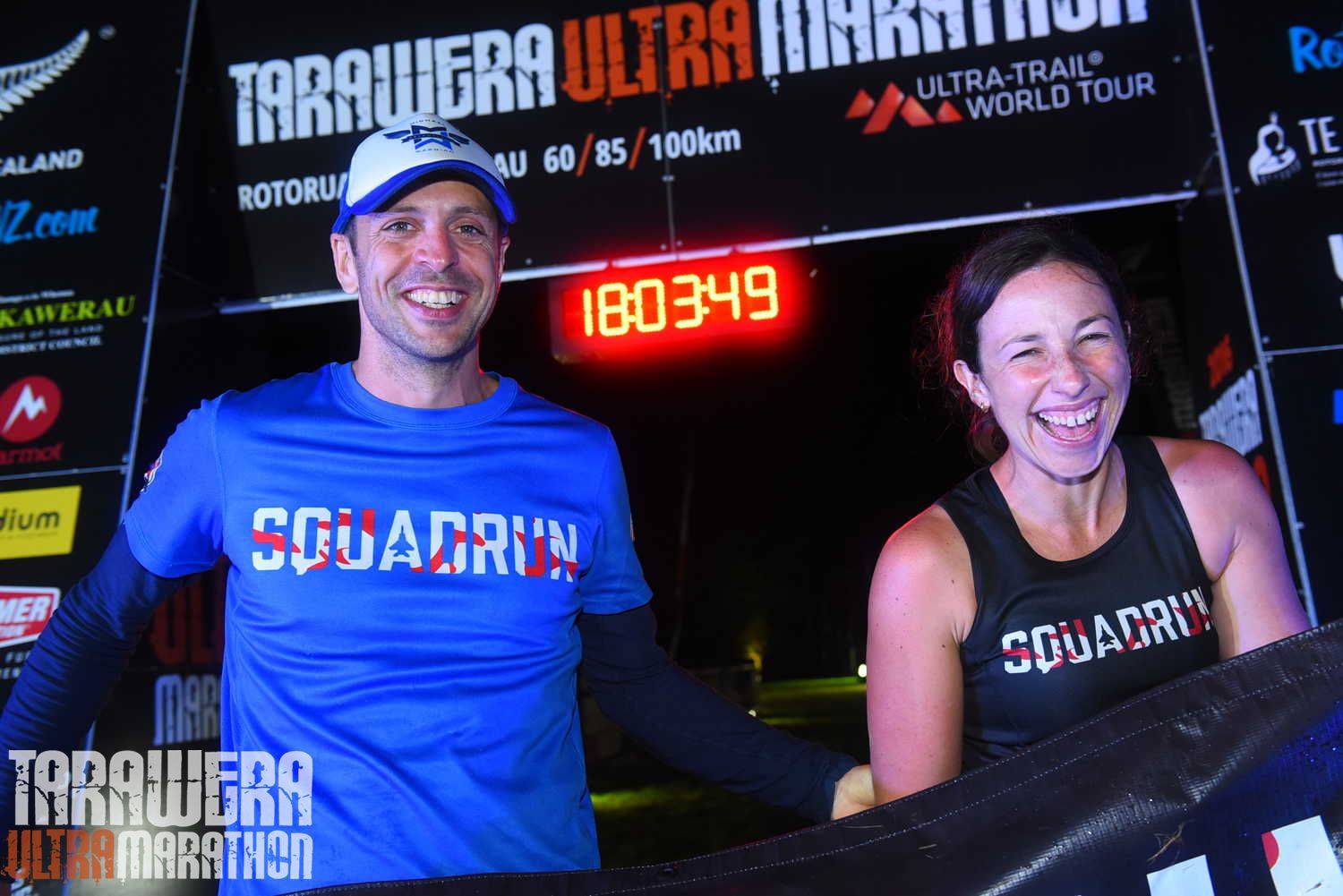 Word of mouth soon got out that this SQUADRUN thing was a lot of fun and more people joined. By September it was too much for Kerry, and I joined the ranks. We started to build a running community which was exciting, motivating and supportive.  Fast forward to October the 15th when Ultra Trail Australia entries went live. We had 97 people sign up in the first 12 hours and we soon realised that to give these athletes our full support I’d need to leave my job teaching 5 year olds so that we could support  our runners  the way that we wanted to. To  do it  justice and catch up with them for runs, races, and chats, be there to fully support them in their build up to Ultra Trail Australia. 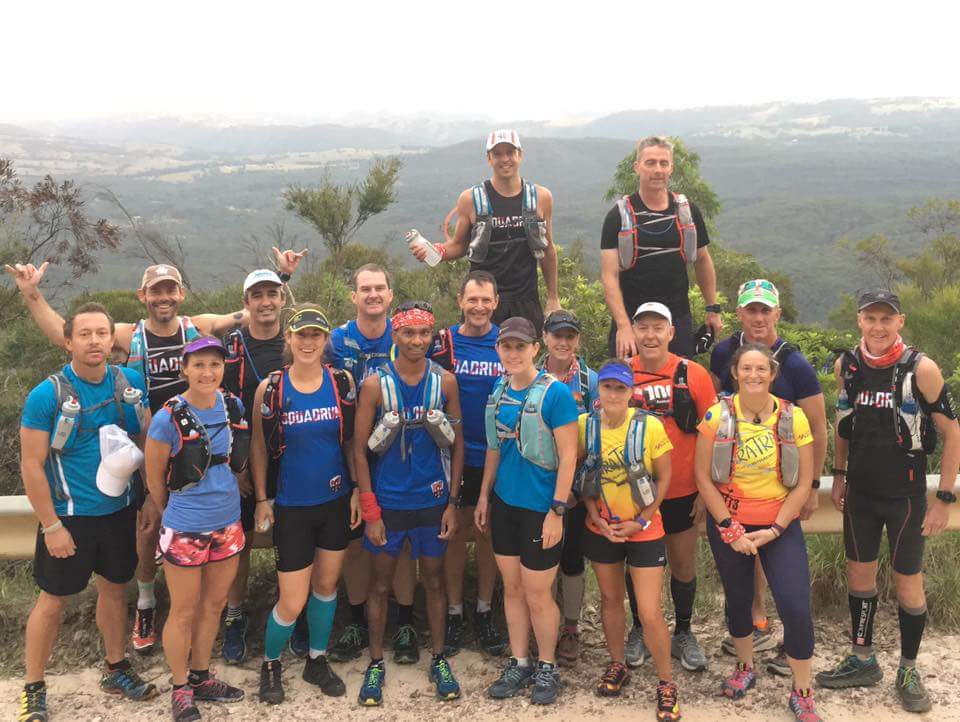 A really great bunch of people!

Over the past 7 months we have met so many amazing people and heard so many amazing stories about how people have faced adversity and used running as a way to combat it. Trail running is raw, it’s earthy, and I’ve found that trail runners communicate with brutal honesty and share life stories that your everyday human wouldn’t consider sharing. In doing so, I believe that it also ties us more closely to each other. There’s a deep friendship and understanding that comes with people opening themselves up and laying themselves bare. 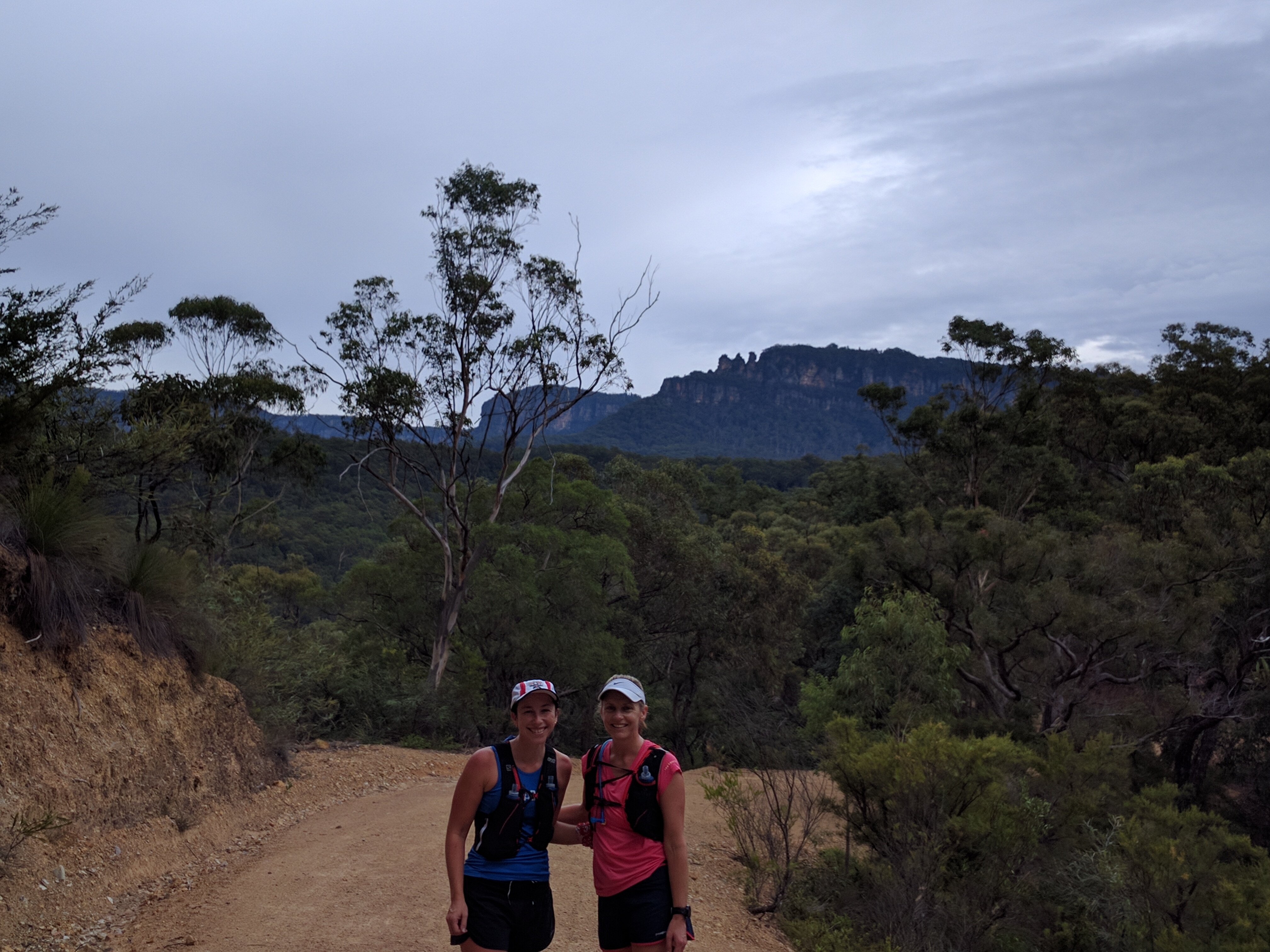 All of a sudden Ultra Trail Australia was upon us.

The expo was a whirlwind of friendly faces, excitement, nerves, cuddles, and of course top class running stalls (we wanted to buy everything). We loved some of the advice and finish line desires that UTA runners provided us with: 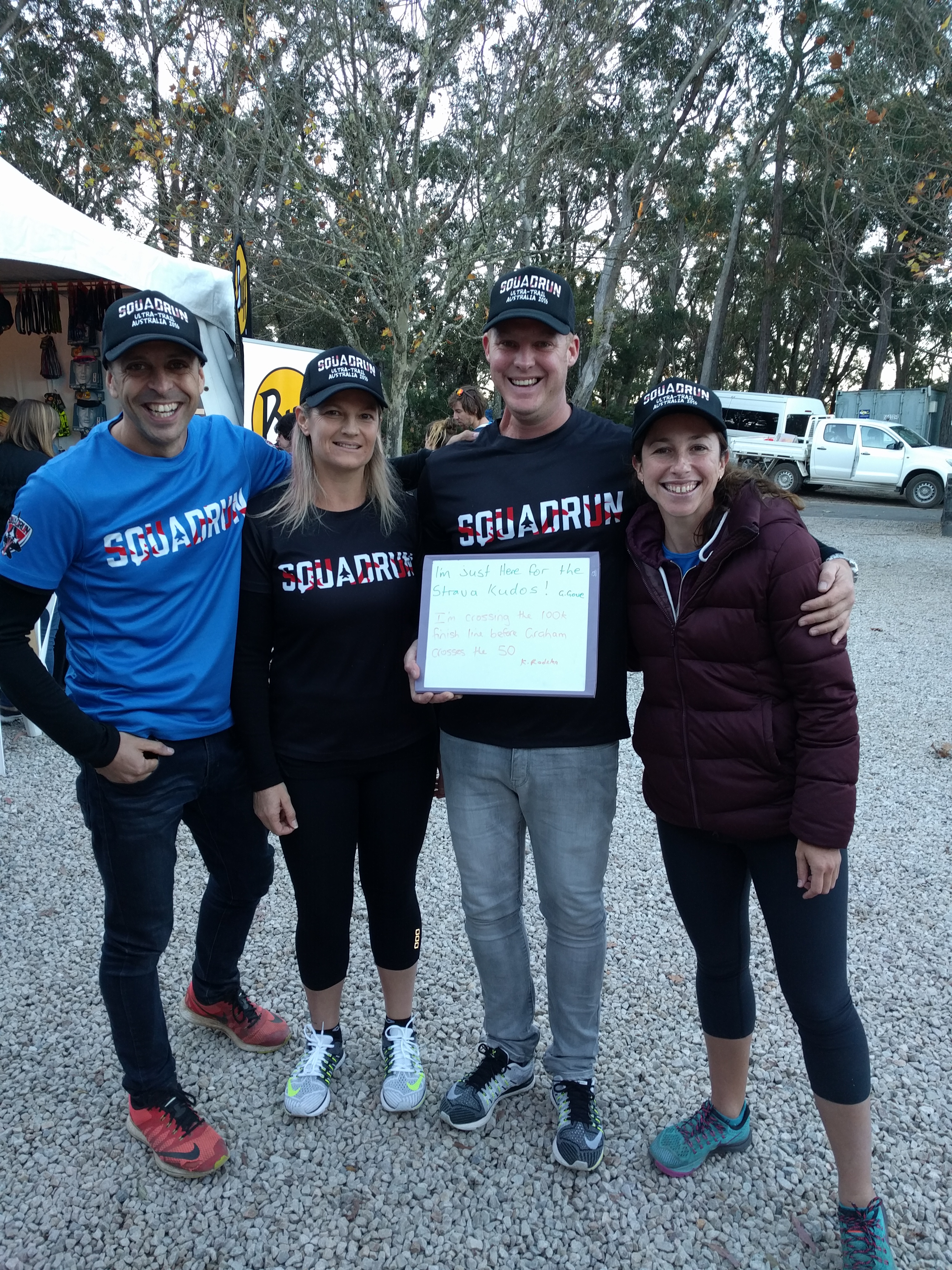 Graham came for the ‘Strava kudos’ and Kirstens aim was to beat Graham to the finish line. 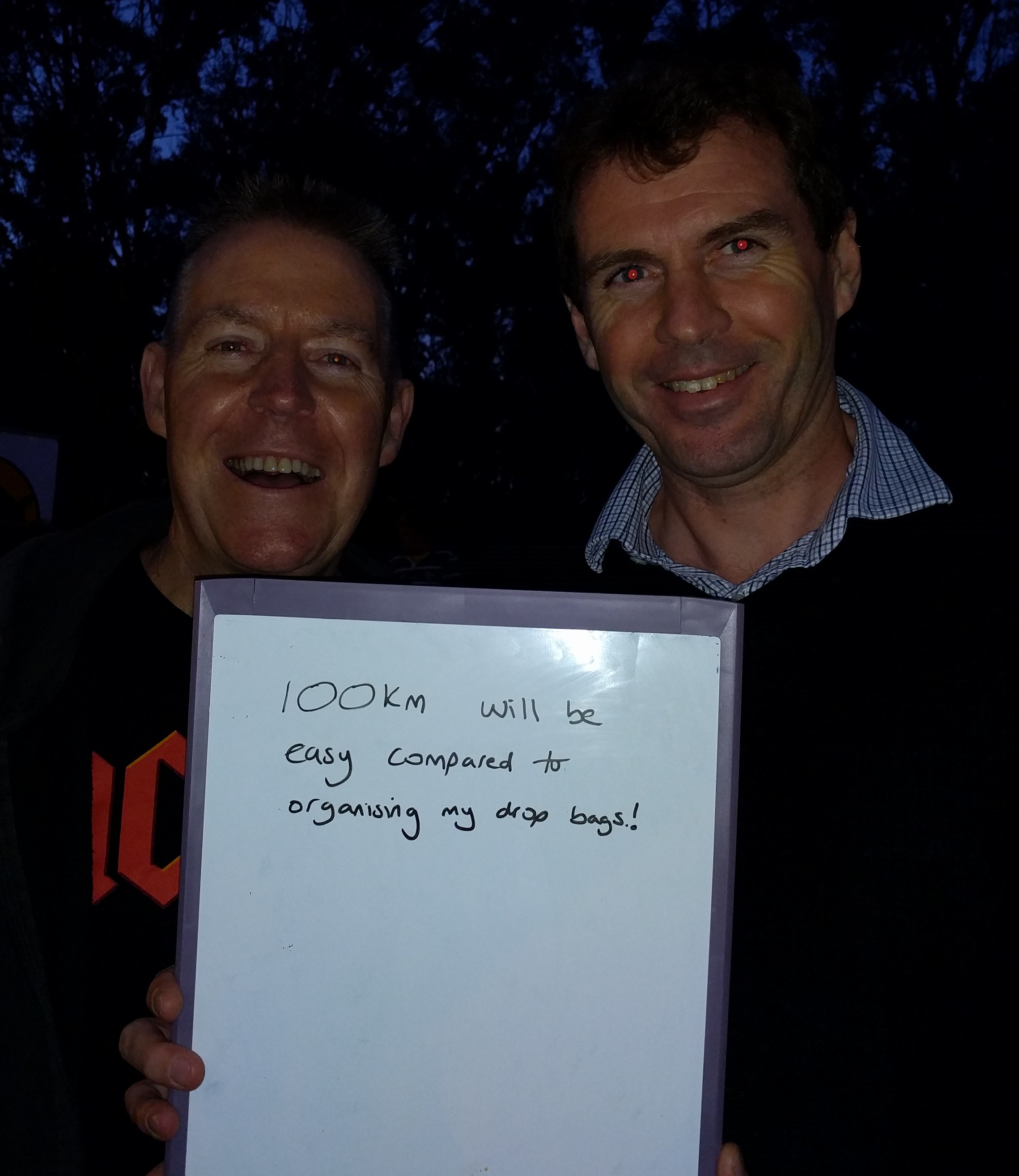 ‘100km will be easy compared to organising my drop bags’ 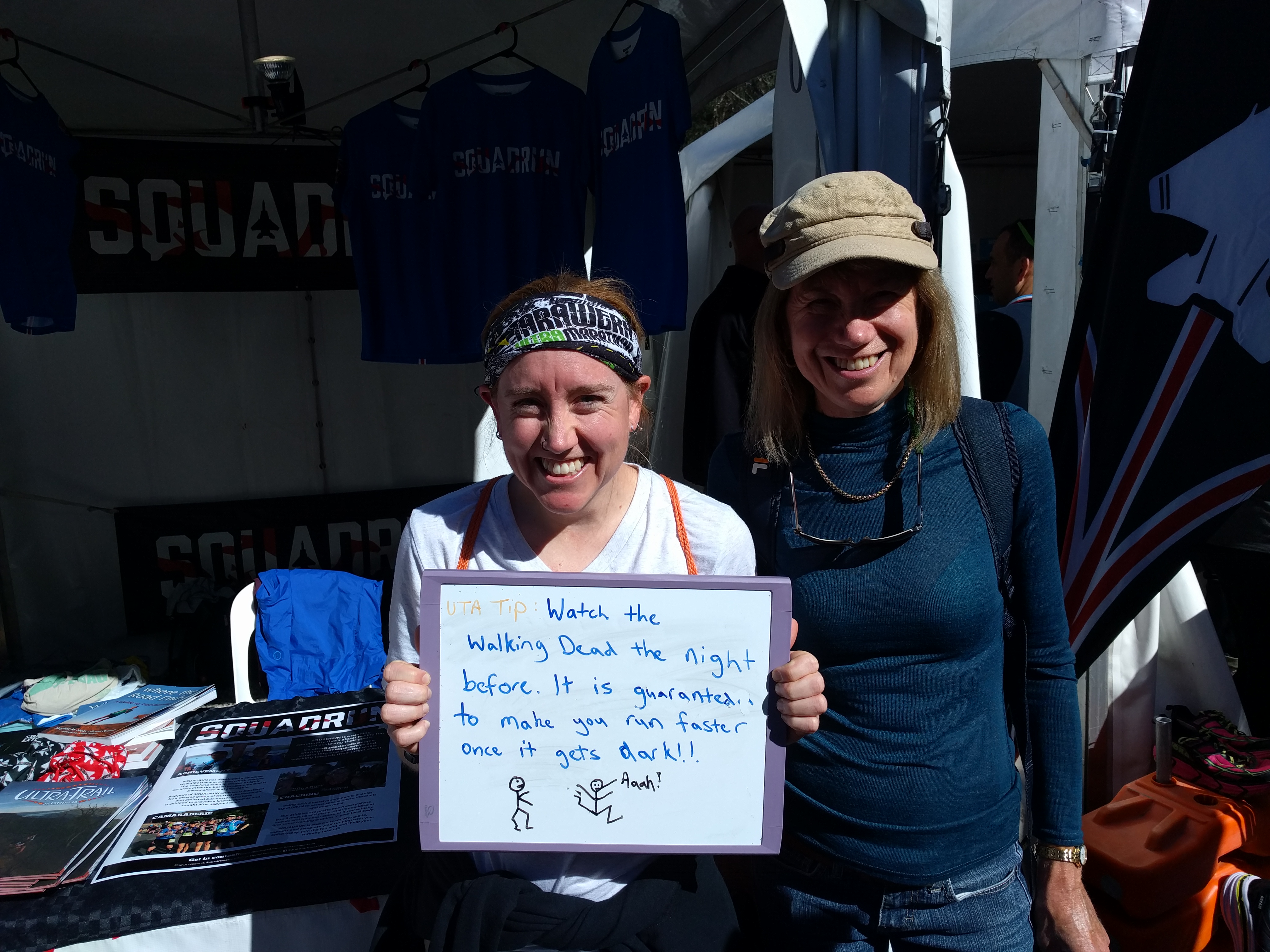 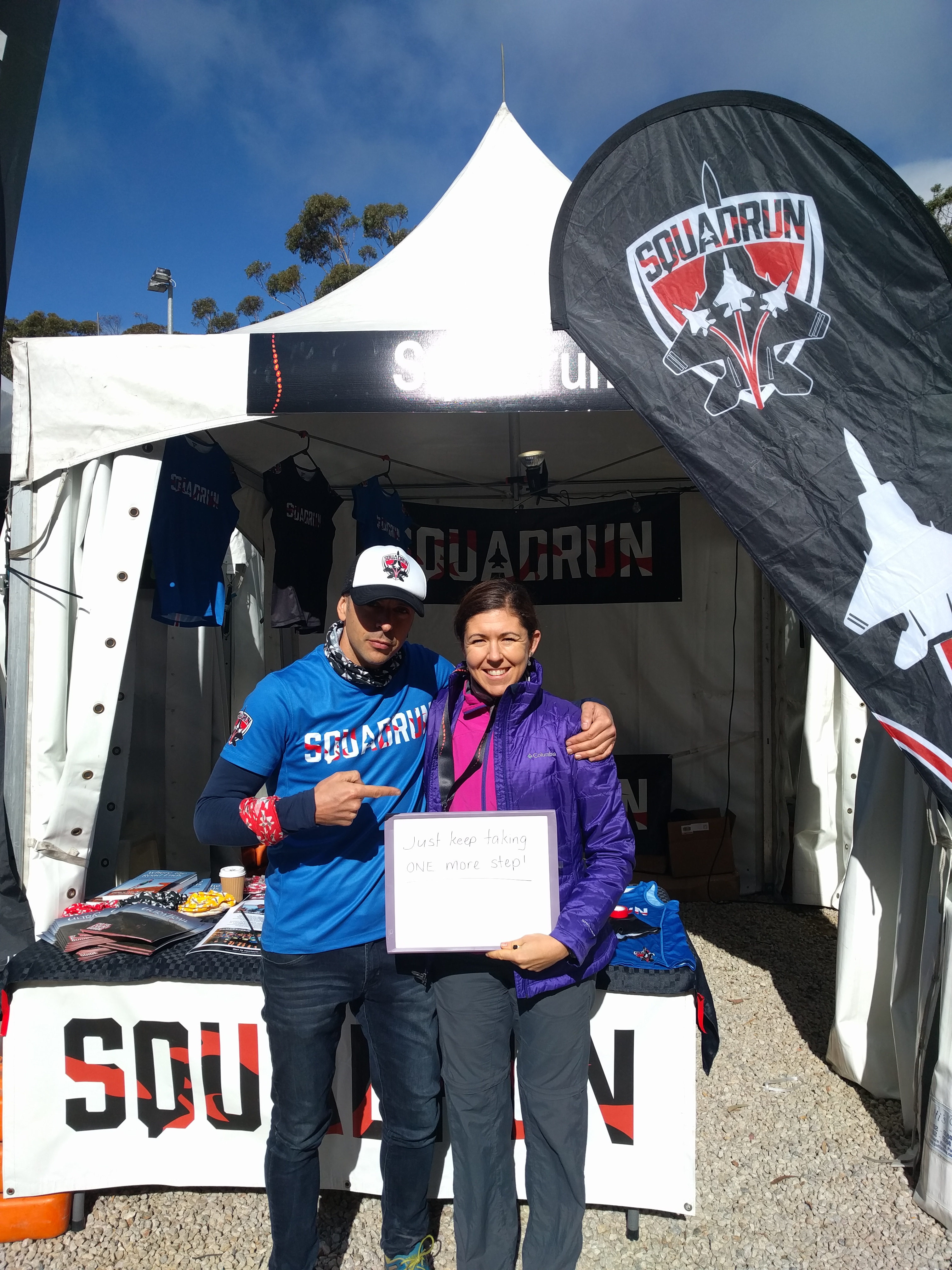 And then, before you knew it the day was here.

What a beautiful day it was too. The sky was clear, the stars were out and the air was still.

Around us there was a buzz.

We were so excited to see everyone.

Lots of nervous chit chat coming from our runners, and then the beautiful sounds of digeridoos and clapping sticks to get everyone started. 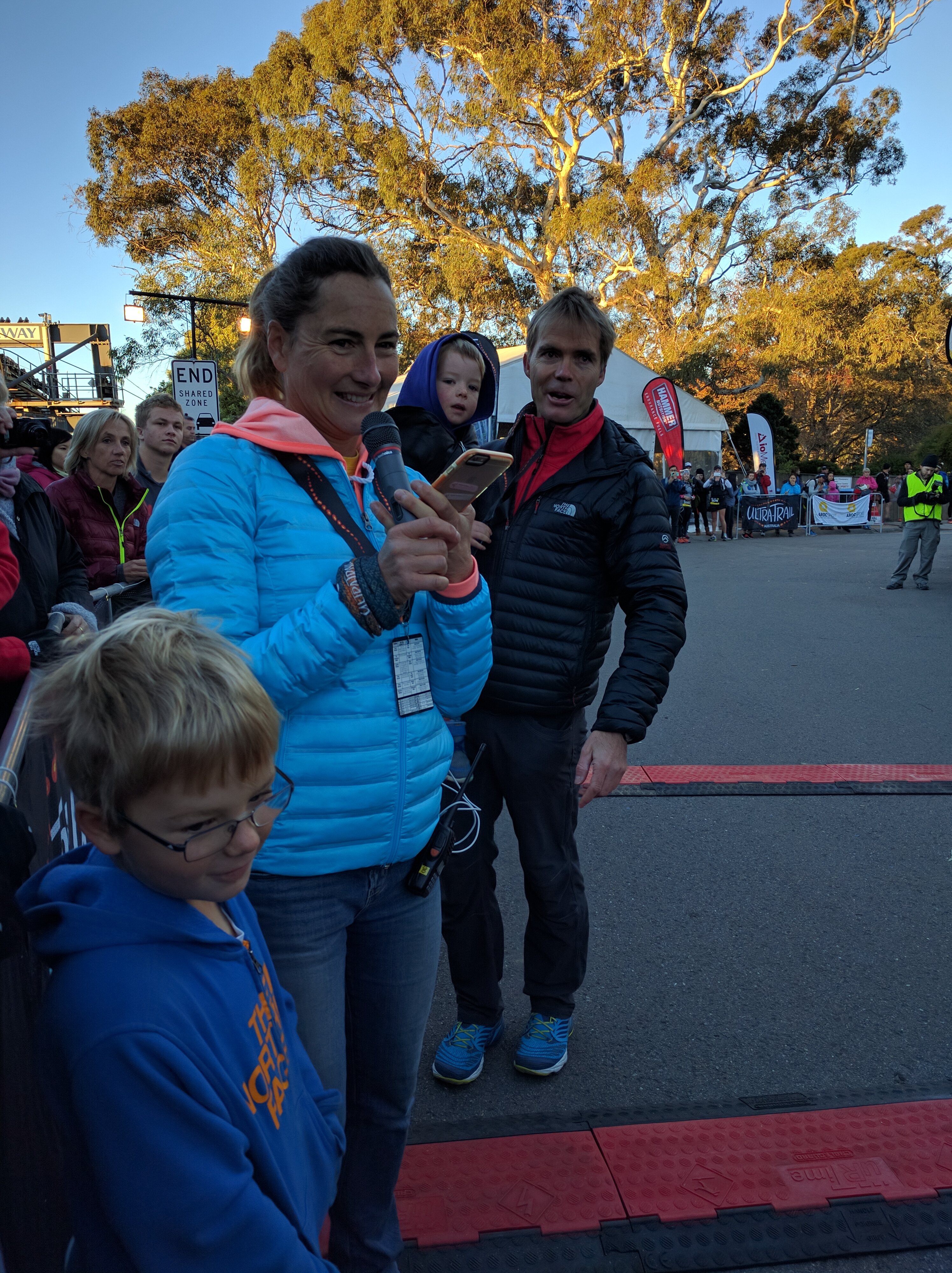 A mad buzz of energy, countdowns, crowds setting off, and then we waited. It was our turn to be nervous. Hoping all of our friends were ok, hoping that they were enjoying themselves and hoping that they would complete the big, scary goals that they had trained so hard for.

Soon the first runners charged in. I was so excited to hear that Mark Green was leading the men’s 50 by a large margin. Mark is both mine and Kerry’s physio and we have sent all of the runners that we could his way, as we know that with The Body Mechanic they are in expert hands. We cheered loudly and then continued to cheer for all of the others who crossed that line.

We were also super excited to see another friend, the wonderful Hanny Allston come in first place in the women’s 50. Hanny has worked a lot with our athletes as well, providing in depth nutritional advice, and for this we are very thankful.

Not long after Mark and Hanny had crossed the line our first athlete came home, Kyle Weise. This is a name to watch. He’s young, he’s fast, he’s got a stack of National records as well and  he’s a blimmin’ nice guy, and he has an excellent running career ahead of him. Another Squaddie Kane was not too far behind him. Last year he’d found pacing an issue so it was great to see him nail a pretty blistering run. After that there were many a finish line cuddle. For Kerry and I THIS is the real payback for our hours of hard work. There’s no better feeling than seeing someone you care about, someone who you know has trained through all weathers, for hours and weeks and months, cross that finish line. 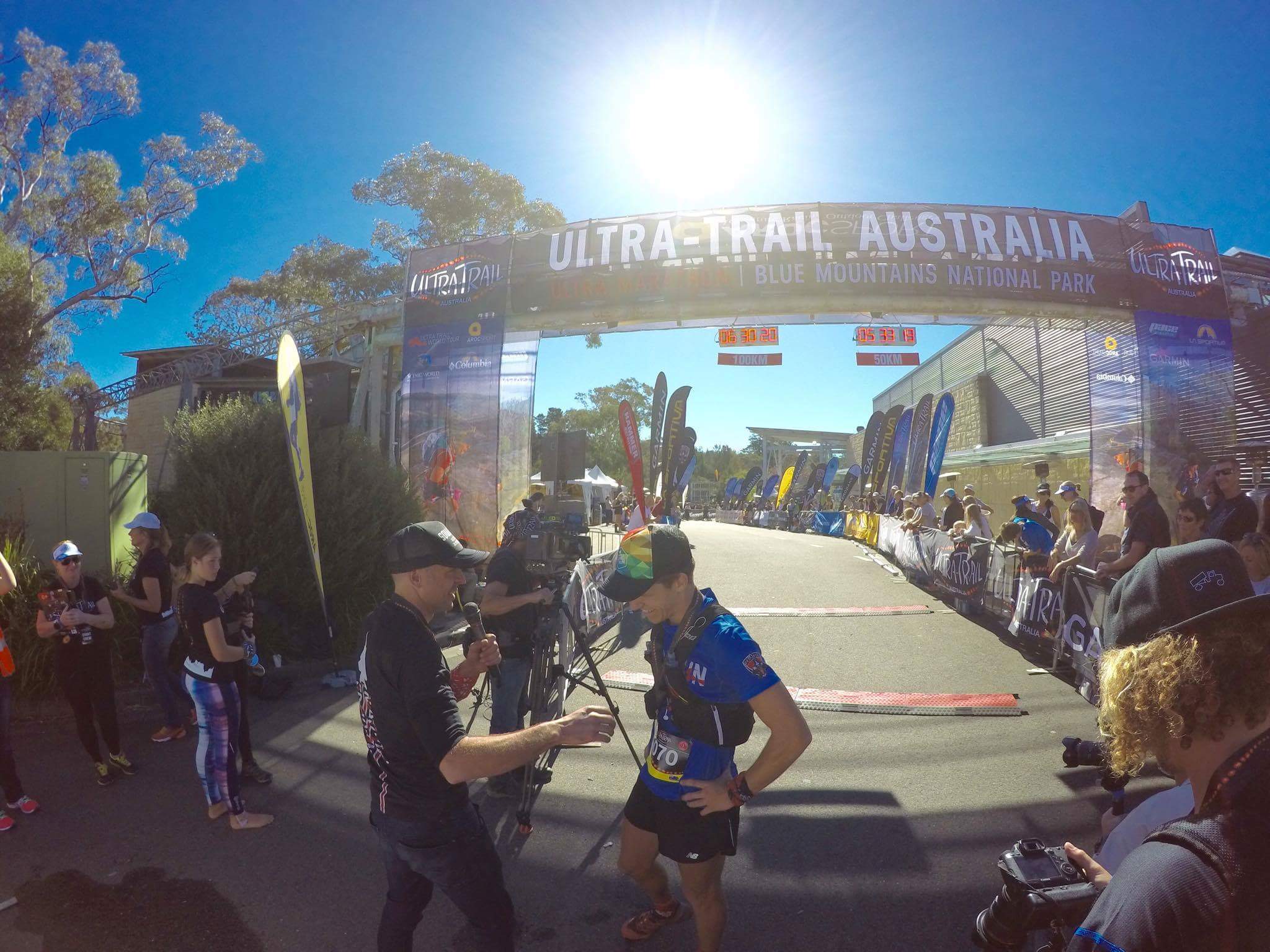 Kyle and Kerry at the finish line

The day turned to night and the runners kept coming in.

We kept checking up on the Ultra Trail Australia app to see where our runners were and when they were getting to the bottom of Furber stairs so that we could be there for that all important finish line hug!

The crowds slowly dissipated. Still the runners kept coming in. The supporters grew quiet but still the event rolled on. The Ultra Trail Australia staff didn’t tire, they cheered in every runner like they were the first.

Our last Squadrun athlete Greg Kelso got in around 5:30am  to cheers and hugs from his family and two very proud coaches 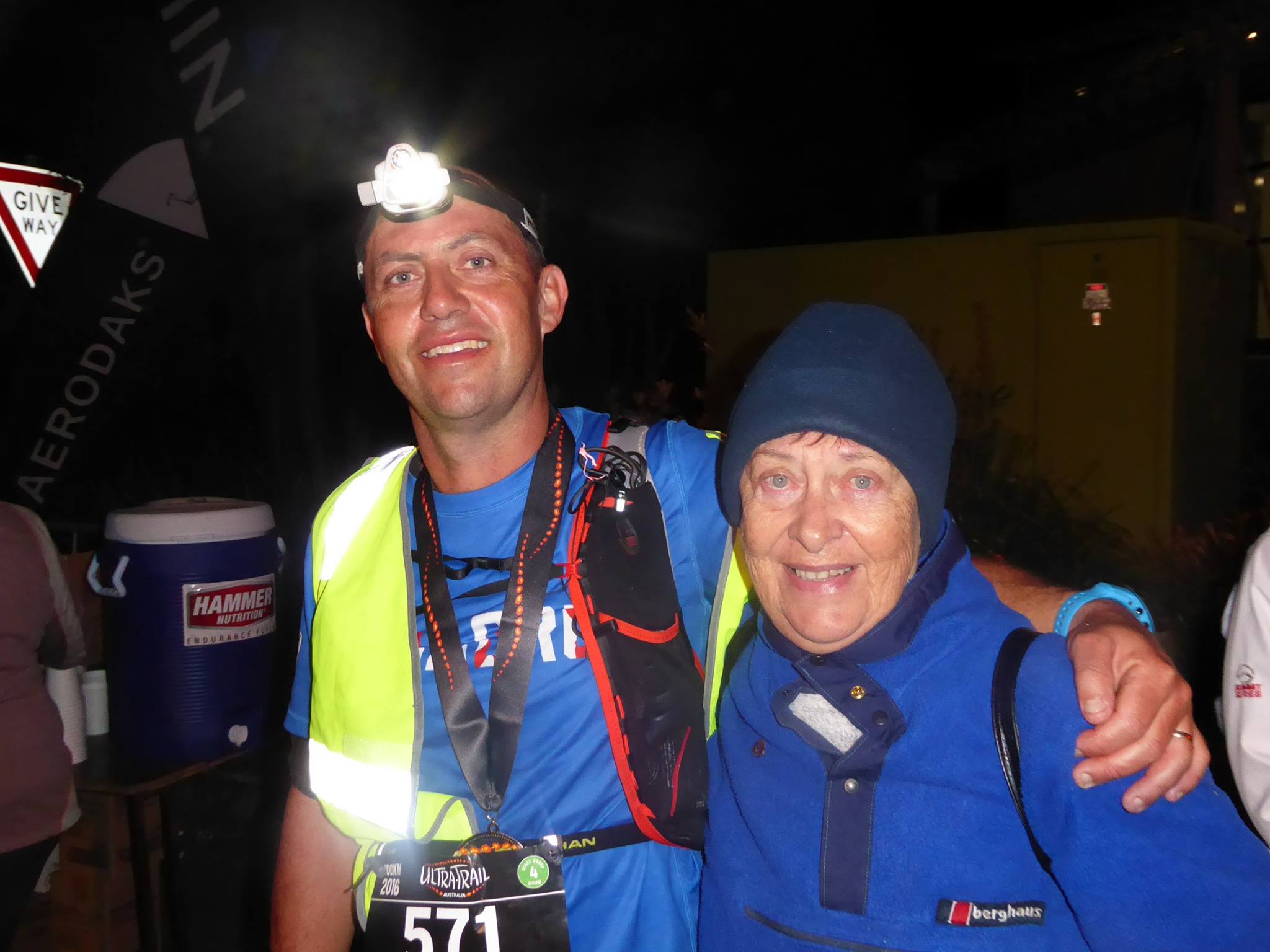 Greg and his mum

Still a dedicated crowd stayed and we cheered in the runners who were coming in after almost 24 hours on their feet. A display of true stamina and mental grit on their behalf.

Around 6:30am Alina approached Kerry and I and said ‘you have to go and check out that sunrise, it’s just amazing’. We headed up to the deck of Scenic World and looked out at Mount Solitary and were gifted a sunrise that I will never forget. It seemed like the perfect end to this chapter and the perfect beginning to a new one.

For us, now, there’s no post UTA slump, we have lots of people keen to bust out a fast Gold Coast or Sydney Marathon, people running Hounslow, Surf Coast Century and some eyeing up G.O.W100. Not to mention a whole heap of Squaddies saying that they want to beat their UTA time for this year so are keen to start training for that ASAP… No rest for the wicked huh?! 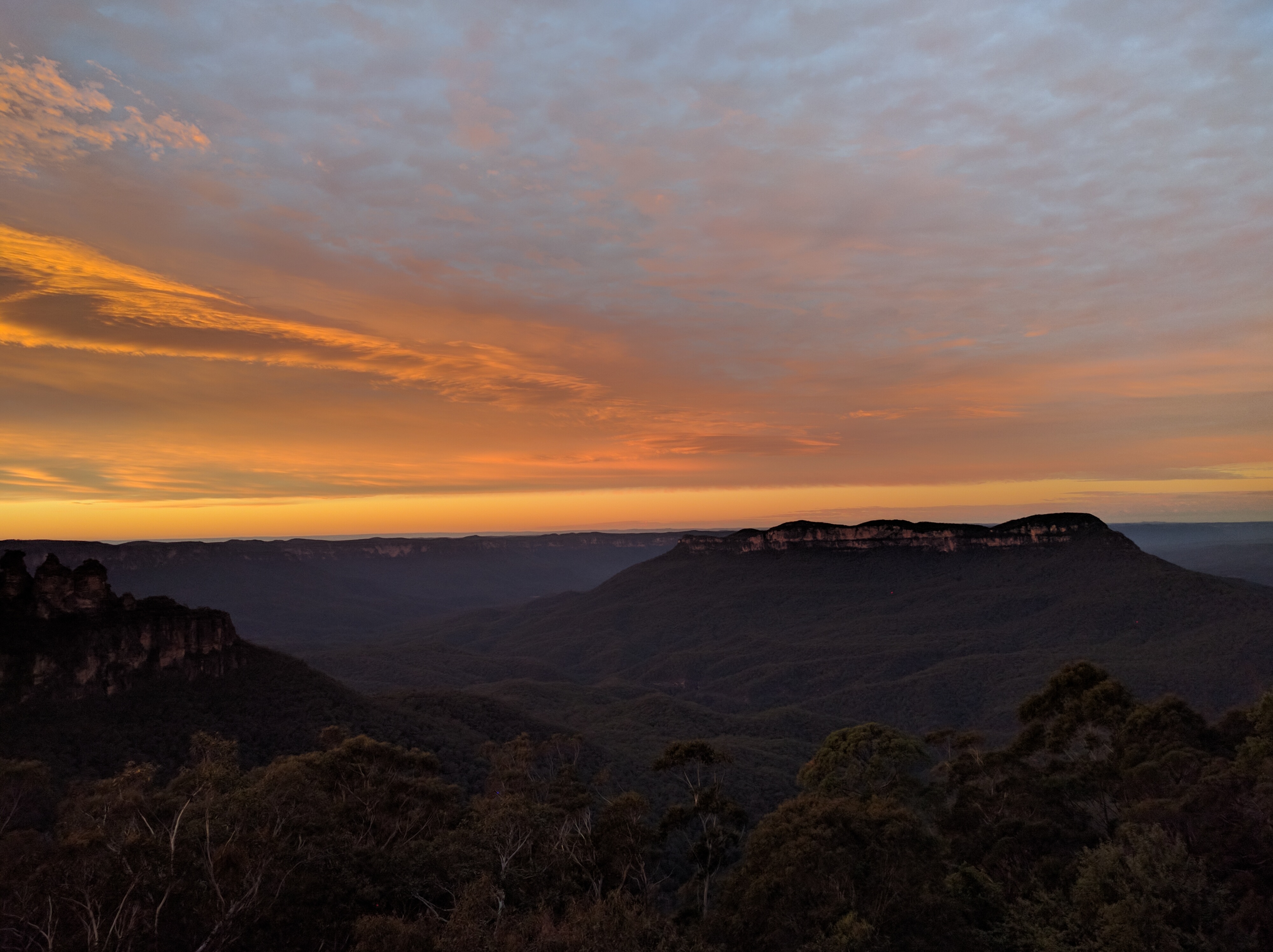 Words can’t express how much the people and this event have touched my heart.

To the runners, seeing you all finish, push yourself and achieve something that many of you didn’t think was possible, witnessing the love and support of your family and friends, and hearing about what it meant to you has brought myself and Kerry to tears countless times. I have said it once and I will say it again Ultra running isn’t glitzy, it’s about facing your own demons and proving how truly strong you are, and you, Ultra Trail Australia competitors are truly strong.