The Kepler Challenge has been on the fringes of my imagination for longer than I remember. The race started in 1988 and was always one of those races that insanely fit people did, but I never really thought I would.

After I completed UTA, my family in NZ would occasionally say “You should do Kepler” and my response was always “I’m not ready”. It was a race made legendary by it’s toughness and I honestly felt one 100k ultra in blue mountains was not enough to prepare me for it. But that spark had been lit and, come entry day, I was at my computer at 4:30am, wielding the refresh button like a champion.

And I got in! No wait list, nothing. I was 100% confirmed, entered into Kepler. There was no more ‘I’m not ready for this’.
Living in a highly urban part of Australia, there was little I could do to develop my mountain running skills; all I could was train the endurance, try and up the speed and hope the small amount of alpine experience I’d had was enough to get me through. And there were a few panicked trips to the blue mountains to run up hills as December rolled around.

One of the challenges of Fiordland is that the weather can be changeable and extreme. I arrived with reports of waist deep snow on the trail, 114mm of rain and gale force winds a few days earlier. And the mountain was indeed snow-capped when I arrived in, mercifully pleasant weather. I nervously wandered around the lake hoping the sudden arrival of what the locals assured me was summer ( a balmy 17 degrees) would melt some of the snow.

Off to the race briefing and we were assured there was only small chance of rain, but that there was still significant snow on the trail. A not terribly reassuring man told us there was very little chance anyone would die during the race, but, if someone did, it would most likely, be a man in his 50’s, from a heart attack who had had no previous issues. We also got told the 12 hour cut-off time would be enforced and that there would people would be withdrawn if they hadn’t got to Motuarau hut within 9 hours, or rainbow reach within 10 hours.

Race day rolled around early. I wandered into town to catch the 5:15am shuttle to the start line. I sat next to someone who had done the race previously and advised stopping before the end of the treelike and rugging up. “once you break the treeline, it’s like walking into a fridge” he said.
Once we got to the start line, our race numbers were accounted for, and, after a low key countdown, we were off. The first 5k was a wonderful groomed piece of wide rolling trail, and I made comfortable time to the first aid station. from there, the trail started to climb. And climb and climb. Soon, there was no more running. Just a steady slog up a 1350m incline. I was still making solid time and spotted a fellow squaddie on the way up. In retrospect. I probably attacked that hill a little harder than I should have. Shortly before we broke the treeline, calls of “runner” echoed up from the trail below. The front runners from the shorter “Luxmore grunt” course were coming through. That course is 27k. It runs up the hill to the ridgeline and back down to the lake. Every single runner I saw from that race had pain etched deep into their face.

Eventually, after around an hour of climbing, we could see the edge of trees and felt the first bite of the wind. I took the advice of my travel mate, and stopped to put on a fleece, then stepped out onto the exposed ridgeline. ‘Fridge’ did not cover it. This was a blast freezer. I ran, buffeted by the wind for a few hundred metres, through tussock and along the boardwalks, untiI I could see the fiords below and then I stopped and I cried. Not because this was clearly going to be tough or that I was already feeling fatigue in my legs and knew I still had a long way to go (although they were both true). But rather I was overwhelmed by such an intense feeling of gratitude that I was there in this utterly spectacular piece of wilderness. Aside from a few moments of dark headspace around the 40k mark, that feeling never left me.

I ran on to the next checkpoint (also the turn around point for the ‘Luxmore Grunt’), stopping only briefly to refill water and for a compulsory gear check. Following the lead of other runners, I put on my gloves and beanie and exited the hut area.

This led out onto the ridge section. I was not prepared for this section and I honestly don’t know how I could have been, training in Australia. This was 2, maybe 3 hours of being utterly exposed to the elements and the altitude. The track was cut up and slippery and, in places, the snow was almost up to my knees. They had predicted 0 degrees, with a 10-15 degree windchill factor at the summit and it was at least that. I took a glove off at one point to snap a quick photo, and my fingers were in pain from the cold for some time afterwards. This was a hard slog. My face froze and I pulled my squadrun ™ buff down over my face, forming a makeshift balaclava and would have to stop from time to time for fear of being blown off the ridge.
And we kept climbing and climbing.
There were trampers on the trail, who would politely step to one side to let us past, offering cheers and encouragement, although they were clearly quite shattered themselves.
I was constantly checking myself to make sure I wasn’t getting hypothermic. I sang songs to myself (‘Living on a prayer’ was stuck in my head the whole day!), listening to check if I was slurring words, double checking if I was shivering or light-headed. I overtook another lady and checked how she was coping. She exclaimed “oh this is fine. I haven’t even put my parka on yet!” Kiwis are a tough breed.

We finally dropped down into a saddle and I heard a familiar “KA!” on the wind. Keas! There were Keas! The New Zealand alpine parrots are known for being fearless and very cheeky and three of them sat on the updraught , a metre above my head as I hit the next check point. The marshals had made a snowman, and placed some beers in it for a celebration once the stragglers were through. The keas had, of course, decided they were for them and were trying to pick them out of the snowman. The marshall assured me they had stolen an entire loaf of bread earlier in the day in the exact tone a parent uses around a naughty but favoured child. The keas hopped along the track with me, escorting me towards the last section of the ridgeline; I was sad to lose their company.

From here the trail rolled and I could run more then, it finally turned towards the descent (well, after a bit of confusion at a diversion towards a lookout. It turns out trail marking in NZ races: not a thing). Coming down the mountain on soft groomed trails then breaking into the treeline, finally getting relief from the wind was a great lift and I made excellent time, loping comfortably down the hill, until around half way than BAM!, my calf cramped up, wouldn’t take my weight and I went down. Fortunately, I just scuffed myself up a little, but I was shaken and would remain a little cautious on the downhills for the rest of the day.

A series of switchbacks took us to the bottom of the hill, where we were were greeted by a marshal dressed as the pope. This was the 30k point and the start of the ‘flat’ section. A quick glance at my watch told me the hill section had taken 5:20, so I knew I needed to keep pace to make the cut-offs.
A quick water refill and I set out on the run along the valley, making a reasonably solid pace, to rocky point, passing a few other runners along the way. We had been told in the briefing that this was our first indication point of whether we were on-track meeting the timing. The marshal there informed me we were at 34k and had another 27 to the finish line with 11k to the next checkpoint, but that I was an hour ahead of the cut-off time.
This was the start of the head-game. I was sure he was wrong, and was certain I had covered more than 4k in the last hour, but the course map only had the elevation level for this checkpoint and my GPS watch had long since decided that was all too difficult for its tiny silicon brain. Knowing I only had 2 hours to get to the Moturau Checkpoint, I pushed hard through this point, with heavy legs. This section follows the river to lake Manapouri, than crosses over to the next valley to the Waiau river and on to the finish at Lake Te Anau. With the thick bush covering any reference point, and my head still arguing the distance, this was tough push. Descending into the checkpoint (a mere 5k away *shakes fist*) another runner caught up and thanked me for dragging her along “everytime I felt like stopping, I’d spot you running and push myself to keep going”. I left the checkpoint before her and saw her cross the finish line a few minutes behind me.
This checkpoint told me I was doing fine and was 30 minutes ahead of the cut-off, with 6k till the next one at Rainbow reach. A park run and some change!

I set off for Rainbow Reach (the last checkpoint with a cut-off) in a much better headspace, hitting that, and its very welcome ‘9.5k to go’ sign, with 40 minutes up my sleeve. After assurances from the marshall that the rest of the course was completely flat, I climbed the steep hill immediately out of the checkpoint and headed for the Waiau river. By this time, my legs were struggling badly with the downhills and weren’t terribly thrilled about the uphills either. Fortunately, the plush kiwi trails made it a bit easier and I started to spot day hikers on the trail, as well as the laden trampers.

Santa greeted us at 5k to go. I asked him for a Speights beer at the finish line. He said he would try and see what he could do as I set off. I glanced at my watch and realised I was now an hour ahead of the cutoff and I a moment where I was totally overwhelmed; I was about to finish the Kepler challenge; my legs were completely dead and there was more brisk walking than actual running, but I had this.
I could hear the finish line and, at 1k I managed a shambling jog for the photographer before spotting the bridge and making some semblance of sprint finish. I seem to recall holding on to the lady presenting me my medal to make sure she was real. The my sister meeting me at the finish line (with my speights beer that I’d placed in my finish bag. Wishes come true much more frequently if you plan in advance). 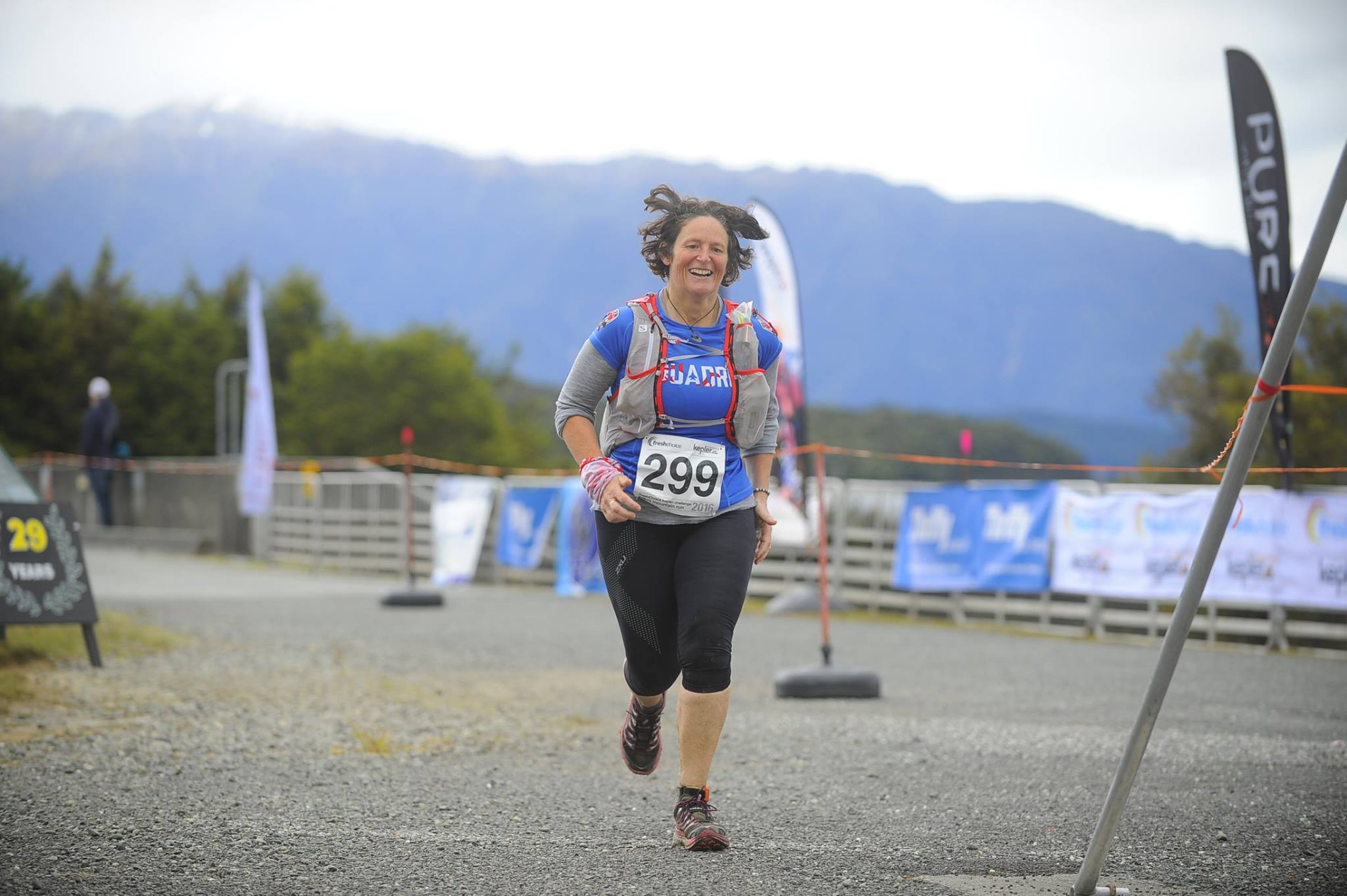