It’s the injury we see most often as coaches and something we always acutely aware of as runners.

Iliotibial band syndrome (ITBS) is the second leading cause of knee pain in runners and is the number one cause of lateral knee pain. (1)

ITBS is an overuse running injury that results from repetitive friction of the IT band over the outside of the knee joint, with biomechanical studies demonstrating a maximal zone of impingement at approximately 30 degrees of knee flexion which occurs soon after heel strike when running.

Training factors related to this injury include excessive running in the same direction on a track, greater-than-normal weekly mileage and downhill running (2)

ITBS is a is related to a weak hip abductors 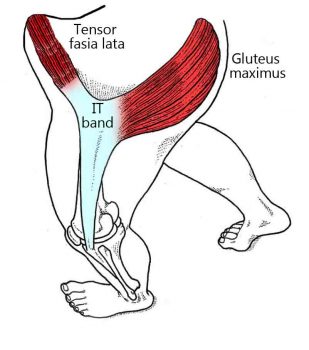 Runners with ITBS exhibit significantly weaker hip abductor muscle strength in the affected limb compared to the non-injured limb and compared to the healthy runners. (4)

Large scale meta Analysis of almost 3500 separate studies indicate that “consistently favourable estimates were obtained for all injury prevention measures except for stretching. Strength training reduced sports injuries to less than 1/3 and overuse injuries could be almost halved.” (7)

Following a 6-week hip abductor strengthening program, ITBS patients demonstrate a 35% to 50% increase in abductor muscle strength and were free of ITBS pain while running indicating a clear relationship between hip abductor muscle weakness, side-to-side imbalances in strength, and the development and effective treatment of ITBS. (4)

The development of iliotibial band syndrome appears to be related to increased peak hip adduction and knee internal rotation. These combined motions may increase iliotibial band strain causing it to compress against the lateral femoral condyle. The data suggests that treatment interventions should focus on controlling these secondary plane movements through strengthening, stretching and neuromuscular re-education. (5)

Weakness of the hip abductor muscles may result in changes in running biomechanics which may necessitate greater passive restraint from the IT band while running and, over time, lead to the development of ITBS.

In this section we demonstrate many of ‘most effective’ – by measurement of isolation and activation forces – exercises you can do in your own home for the intervention of ITBS.  Please ensure all care is taken to complete the exercises safely and correctly.  Many detailed instructional videos for these exercises are available elsewhere online.

Strength training affects greatest adaptation when completed at higher-load, lower repetition(15).  Reps of 6 or 7 approaching failure, in sets of 3-4 depending on experience and conditioning.  We recommend you add resistance bands(12), weights or similar to the following exercises to facilitate this fatigue and ‘near-failure’.  Rests between sets should be between 30-60 seconds(13).

While there are many hip abductor exercises, two ‘side-laying’ movements were shown to best isolate individual abductor muscles.

The side-lying hip-abduction exercise was the best exercise for activating the gluteus medius (10) with little activation of the tensor fascia latae and anterior hip flexors. (6)
Start sidelying on non-dominant side. Subject flex the hip and knee of the support side and then abduct the dominant leg to approximately 30 degrees while maintaining neutral or slight hip extension and knee extension with the toes pointed forward gradually up and down.

The ‘clam’ or ‘clam shell’ exercise resulted in the greatest activation of the anterior hip flexors with little activation of the gluteus medius and gluteus maximus. (6)
Start position is sidelying with hips flexed to approximately 45 degrees, knees flexed, and feet together.  Externally rotate the top hip to bring the knees apart then slowly returns to start position.

For each of the major abductor muscle, the greatest two exercises for activation (by maximal voluntary muscle contraction)(10) are listed as follows,

Abductor exercises are a good intervention for existing sufferers of ITBS.  Strength training for injury prevention and performance should be specific to activity and relative to range of movement during anticipated running conditions.  In hard hiked hills this may call for a strength programme of step-ups, squats or lunge-type exercises.

The exercises demonstrated above are focused around intervention of existing ITBS.

There is no evidence to support the activity of foam rolling to reduce onset or recovery of ITBS.

Foam rolling may help with Range of Movement (RoM) and Delayed Onset Muscle Soreness (DOMS) (8-9) – neither of which are related to ITBS.  No link is made to foam rolling as remedial work for ITBS.